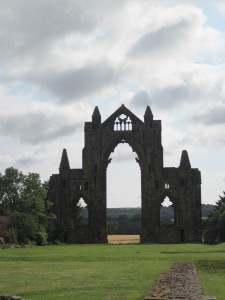 Guisborough is a market town and civil parish in the county of North Yorkshire within an unitary authority of Redcar and Cleveland and in the Tees Valley region of the North East of England. For ceremonial purposes it is in the ceremonial county of North Yorkshire. The population of the Guisborough ward in the Redcar and Cleveland unitary authority taken at the 2011 census was 7,622.

Historically in the North Riding of Yorkshire, the civil parish of Guisborough including the outlying villages of Upleatham, Dunsdale and Newton under Roseberry had a population of 18,108.

Guisborough was formerly part of the North Riding of Yorkshire, from 1974 to 1996 part of the County of Cleveland and now in the unitary authority of Redcar and Cleveland. Gighesbore is recorded in the Domesday Book and the ruined Gisborough Priory dates to the 12th century. The priory and Gisborough Hall (16th century, demolished and rebuilt) are spelt without the first U. Some other old sites and names use that same spelling.

The ruins of Guisborough Priory are also worth visiting and within walking distance of the town centre. The Gisborough Priory Project volunteers are working hard to restore the historic Priory Gardens in their original surroundings (www.gisboroughprioryproject.co.uk).

Some theories date the town to the Roman occupation of Britain, when it may have been a military fortification. Discovery of a few Roman artifacts support this, such as an elaborate ceremonial helmet, the Guisborough Helmet, but the theory remains unproven.

Extensive residential development occurred during the 1960s and 1970s with the expansion of the chemical industry (at Wilton) and the steel industry (at Redcar).

Guisborough main market, held every Thursday and Saturday with a few stalls attending on a Tuesday, has long been a focal point of the surrounding area. Originally selling cattle and other livestock, the market developed into a general market for fruit and vegetables, clothing and flower stalls. The market is open from early morning to late afternoon on the recently restored cobbles that line Westgate, the principal shopping street.

Guisborough Museum, behind Westgate’s Sunnyfield House, exhibits photos of Guisborough’s history and inhabitants. There is a working watermill at Tocketts Mill.