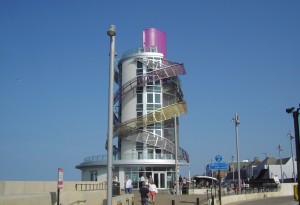 Redcar and Cleveland is one of 4 unitary authorities created from the division of the former Cleveland County in 1996. It is situated in the northeast of England and for ceremonial purposes remains as the most northerly part of North Yorkshire. The unitary authority comprises of the larger towns of Redcar, South Bank and Eston, Guisborough and Saltburn-by-the-sea and the smaller villages of Marske-by-the-sea, Brotton, Loftus and Skelton. The total population of the area is in excess of 136,000.
It is an area of geographical contrasts including an extensive coastal stretch of sandy beaches and sea cliffs, estuary landscape at the mouth of the river Tees and inland hills and moorlands on the escarpment of the North Yorkshire moors.

Redcar and Cleveland is also an industrial area with a redundant large steel plant and blast furnace at the northern end of the beach at Redcar next to the mouth of the River Tees.  The port is the 4th largest port by volume of cargo in the uk ,however it has no passenger facilities.There is also a chemical industry site at Wilton on the outskirts of Redcar.Of the coast at Redcar there is a small scale wind turbine facility (27 turbines)

There are many places of interest for visitors to see in addition to the natural landscape. Redcar has recently undergone massive redevelopment and now offers a very attractive promenade, the Redcar Beacon with its impressive viewing platform and the Hub which houses the Palace Art Gallery. There is also Tuned-in – a new building and facility which offers occasional music and entertainment for the public, in addition to training for young people in the creative and performing arts.

The Regent Cinema on the seafront at Redcar is the only cinema in Redcar and Cleveland and was used in the 2007 filming of Ian McEwan’s book “Atonement,” which starred James McAvoy and Keira Knightly. Redcar also has the Zetland Lifeboat Museum which houses the oldest lifeboat in the world.

Outlying areas.
On the outskirts of Redcar there is a very interesting museum and owl sanctuary at KIrkleatham Hall. The museum provides lots of information about the history of the local area combined with some visiting exhibitions. On a smaller scale visitors can discover more about the history of Marske-by-the-sea by visiting Winkies Castle on Marske High Street while only a short drive away is the smallest church in England at Upleatham.

The Tom Leonard Mining Museum at Skinningrove also provides a very specific insight into the mining heritage of East Cleveland and is currently under consideration for National Museum status.
The council maintains a number of local nature reserves. These are Guisborough Branch Walkway, Flatts Lane Woodland Country Park and Rosecroft Wood, Loftus Wood, Whitecliff Wood, Clarksons Wood, Errington Wood and Eston Moor, so there are plenty of opportunities for people who enjoy walking and exploring the countryside.

For tourist information try the website www.enjoyteesvalley.co.uk which lists places of intrest around the area.

Notable people who come from Redcar and Cleveland include:
William Applegarth – athlete “The Guisborough Flyer” born in Guisborough 1890 and holder of the world record 9.6 seconds for 100m for more than 40 years
Sir Rex Hunt – Governor of the Falkland Islands 1980-1985 from Redcar
Jane Gardham – novelist from Coatham in Redcar
Dave Coverdale – lead singer from the rock group White Snake – from Saltburn-by-the-sea
Paul Daniels – magician and comedian from South Bank
Roy Chubby Brown – comedian from Redcar

Public travel is provided by Arriva buses or Arriva trains