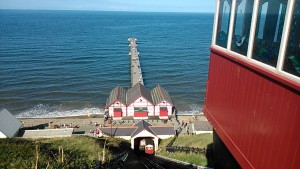 Saltburn-by-the-Sea is a seaside resort in Redcar and Cleveland, a unitary authority in the Tees Valley region of the North East of England, in the ceremonial county of North Yorkshire. Historically part of the North Riding of Yorkshire, the town is around 12 miles (19 km) east of Middlesbrough, and the ward of Redcar and Cleveland had a population of 5,912 at the 2001 Census,increasing slightly to 5,958 at the 2011 census.

The development of Middlesbrough and Saltburn was driven by the discovery of iron stone in the Cleveland Hills, the monies of the Pease family of Darlington, and the development of two railways to transport the minerals.

The coastline is popular with surfers, and national surfing events are held during the autumn and winter months, attracting competitors from all corners of England, Scotland and Wales.

Saltburn has been host to a number of beach parties organised by local dance music lovers.

Saltburn Yarn Bombers are a group of knitters who decorate parts of Saltburn (usually the pier area) with knitted themed events. So far this has included the Olympics ,the Royal jubilee, and Alice in wonderland. These are usually on show for a couple of months before being removed.

The Saltburn Cliff Lift is one of the world’s oldest water-powered funiculars—the oldest being the Bom Jesus funicular in Braga, Portugal. After the opening of Saltburn Pier in 1869, it was concluded that the steep cliff walk was deterring people from walking from the town to the pier. After the company was taken over by Middlesbrough Estates in 1883, they discovered that the wooden Cliff Hoist had a number of rotten supports. The Saltburn tramway, as it is also known, was developed by Sir Richard Tangye’s company, whose chief engineer was George Croydon Marks. The cliff tramway opened a year later and provided transport between the pier and the town. The railway is water-balanced and since 1924 the water pump has been electrically operated. The first major maintenance was carried out in 1998, when the main winding wheel was replaced and a new braking system installed.

Saltburn’s attractions include a Grade II* renovated pier, the only pleasure pier on the whole of Northeast England and Yorkshire coast a local community theatre built in 1910 ( and still in regular use today) various Victorian buildings including the railway station which although extensively rebuilt still contains a  lot of the original facades and repurposed use of the old waiting rooms and offices as shops and restaurant’s/cafés. There is also a set of mosaics depicting areas of Saltburn near the station platform by local artist Helen Gaunt.

Saltburn also has the valley gardens which is an area laid out in informal and formal  gardens complete with tea rooms and a working miniature railway (summer only).  The gardens also lead to woodlands.  Above the gardens is a full size bandstand which hosts performances over the summer months.

There are lots of  restaurants public houses and cafes around Saltburn but mainly concentrated around the older parts of the town.

To view a live webcam view of Saltburn pier and beach click here  (Click on the centre of the picture to activate the live cam feed ,a magic seaweed logo  and advert will appear followed by the webcam image ,it takes about 30 seconds before the image is transmitted)