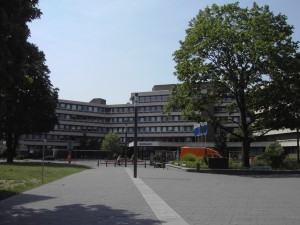 Troisdorf is a town in the Rhein-Sieg-Kreis in North Rhine-Westphalia in Germany. It is 13km northeast of the former West German capital city of Bonn and 22km south of Cologne. The population in April 2014 was 76,435. The largest recent immigrant groups are of Turkish and Greek origin. The religion of the area is predominantly Roman Catholic although other religions are growing with the new arrivals. Troisdorf now has a mosque with a minaret.

Troisdorf has an industrial background not dissimilar to that of Redcar and Cleveland. At the time of the twinning in 1990, the steel plant in Troisdorf did in fact belong to British Steel and there are several companies involved in the chemical industry between Troisdorf and the local airport at Cologne-Bonn.

Troisdorf is within an area of natural beauty encompassing the River Rhine and extensive areas of pine forests.

The town has a large pedestrianized area with impressive sculptural glass water features at each end. There are many shops and restaurants for the visitor to go to within this area. In Fischerplatz there is a further example of public art with Karl- Henning Seemann’s bronze statue of “Der Dicke Mann” (the Fat Man).

There are many places of interest to visit in Troisdorf and the immediate area. Burg Wissem is a unique museum in Europe with its extensive collection of picture book art. Visitors are guaranteed to recognise many favourites from childhood. There is also a Fishing Museum in Troisdorf.

Excellent transport links make it easy for the visitor to travel into Bonn to see the birthplace of Beethoven or to Cologne, where the awe inspiring twin towered cathedral greets you at the front of the main railway station.

Troisdorf has been actively involved in twinning since 1972 and currently has 8 partners including Redcar and Cleveland.
Evry in France 1972
Genk in Belgium 1990
Heidenau in Germany 1990
Redcar and Cleveland in UK 1990
Corfu in Greece 1996
Nantong in China 1997
Musutiste in Serbia 2001
Ozdere in Turkey in 2004